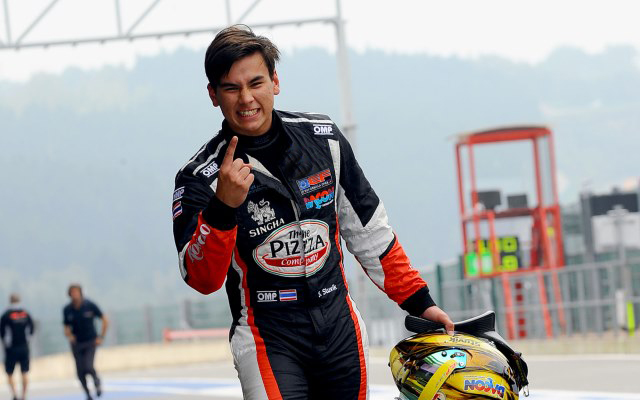 Thailand's Sandy Stuvik will race VSR's Lamborghini Huracan GT3 in the inaugural season of the Blancpain GT Series Asia alongside previously confirmed driver Martin Kodric. Stuvik, who was Formula 3 Open Champion in 2014, will make the switch to GT racing after competing for the last two years in GP3.

Sandy Stuvik: I'm excited to be joining VSR at this pivotal point in my career. I feel the move to GT's is coming at the right time and I want to thank Vincenzo for his faith in me. To be back racing in Asia after a few years in Europe is a joy and I'm especially looking forward to the Buriram round in my home country. Blancpain Asia is looking very competitive and will be a challenge but I'm sure that Martin and I will make this a year to remember. Thanks to my sponsors for giving me this opportunity. I am grateful to be supported by - The Pizza Company, Singha Corporation, Thai Airways, Dacon Inspection Services, the Tourism Authority of Thailand, the Sports Authority of Thailand and the Royal Automobile Association of Thailand.

Vincenzo Sospiri (VSR): I'm delighted to confirm Sandy alongside Martin for the new Blancpain GT Series Asia championship. Even though neither of them has GT3 racing experience they are both young, talented, fiercely competitive drivers and I have no doubt they will adapt easily and be on the pace straightaway. We're all greatly looking forward to starting the season at Sepang in just over a month's time.

The first round of the Championship will be at Sepang, Malaysia on 7th - 9th April.