SEASON FINISHES ON A HIGH FOR AU, NEMOTO AND PRABAKARAN 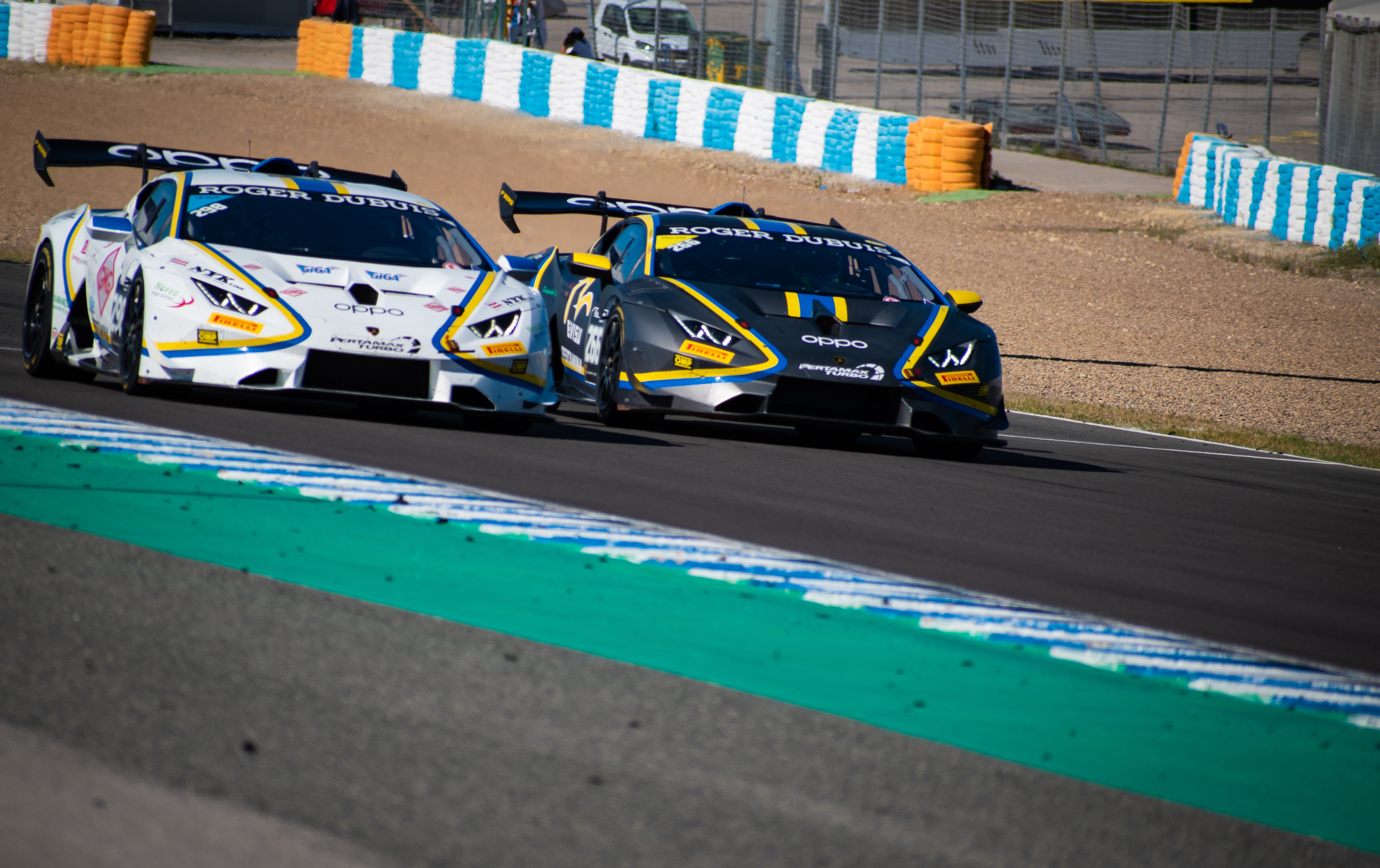 The Lamborghini Super Trofeo season concluded this weekend with the Asian and World Finals held in Jerez, Spain. VSR was present with it’s two Asian entries; a Pro-Am car for Alex Au and Yuki Nemoto and an LB Cup car for Kumar Prabakaran. After six test sessions and two free practice sessions qualifying for the final round of the Asian Championship took place on Thursday afternoon. Nemoto and Prabakaran were out in the first session and it was Nemoto who showed the rest of the field a clean pair of heels, setting the fastest time of the session and taking pole position by over a second from Van Der Drift. Prabakaran qualified third in the LB Cup class.

A chaotic start saw the field held back behind the safety car for three laps, losing nine precious minutes of racing. When the track finally went green Nemoto quickly pulled out a one second gap over Van Der Drift whilst Prabakaran slipped to fourth in LB Cup. By lap nine Nemoto had started to extend his gap to Van Der Drift and the rest of the field and when the pit window opened he had a three second advantage over the New Zealander in the Pro car and was twelve seconds ahead of the next Pro-Am car. Prabakaran, back up to third in class after passing Murroni, pitted immediately for his obligatory stop and Nemoto remained on track until lap sixteen. Au took over the car and the lead of the race but was quickly passed by the battling Pro cars of Chen and Puhakka. Behind him Yazid had moved into second in Pro-Am and was the fastest man on track. Every lap he closed in further on Au but it wasn’t until the final lap that he was close enough to the VSR car to try a pass. Traffic aided him and the pair took the chequered flag just two tenths of a second apart with Yazid stealing the Pro-Am win and third place overall. Prabakaran secured his third LB Cup podium of the year finishing third in class.

Au and Prabakaran qualified the VSR cars for the final race of the Asian Championship. Au, who improved his time in the dying seconds of the session which had been red-flagged with just two and a half minutes left on the clock, took a place on the second row of the grid and was the second quickest Pro-Am car whilst Prabakaran set the fourth quickest lap in LB Cup. Au lost two places at the start, falling back behind Han and Cairoli but by lap six was back to third in Pro-Am. Prabakaran enjoyed a dice with Li in the early stages of the race before settling into fourth in class. On lap twelve the pit window opened and Au stopped to handover to Nemoto who rapidly became the quickest man on track. Five laps later Yazid, the Pro-Am leader, pitted to give his car to Ochiai who rejoined twenty-three seconds ahead of Nemoto. The VSR driver was flying and by lap twenty had halved the gap. As the clock ticked down Nemoto charged up to the back of Ochiai and wasted no time passing him for the class lead, taking the chequered flag in third overall and scoring the team’s third class win of the Championship. A mistake my Murroni late in the race promoted Prabakaran to third in LB Cup allowing the VSR man to claim his third podium finish in four races.

Despite missing the Yeongam and Shanghai rounds Au finished third in the Pro-Am Championship with Nemoto, who also missed the opening races in Sepang, fourth in the standings. Prabakaran’s double podium finish allowed him to jump up to fourth in the LB Cup standings.